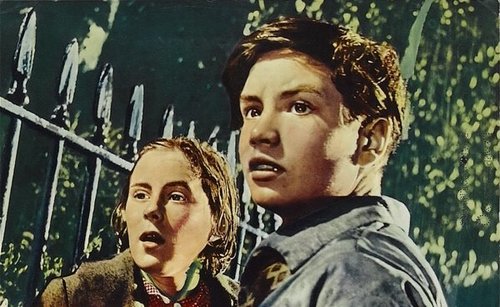 ‘The Child in the City – Children and Environmental Crisis’

The event is FREE, but only limited spaces are available. Booking is essential.

This Critical Excursion will offer a screening of ‘Innocent Sinners’ (Dir. Philip Leacock. 1958. UK. 95mins. Rating: U) at Deptford Cinema followed by an excursion at the modern London locations of key scenes from the film.

The Child in the City’ excursion will consider the recent development of movements emerging in response to the climate emergency, such as the school strikes. Unlike previous campaigns, however, this movement seems to resist using childhood simply as a symbol of futurity. Instead, it situates children and young people themselves as the leaders of the action. This critical excursion wants to begin to historicise the relationship between children and environmental crisis by mapping the displaced play of the “city child” post-Blitz onto the movements of the child in the contemporary gentrified city.

To begin thinking about these ideas we have organised a screening of a rare copy of the 1958 film Innocent Sinners to take place at Deptford Community Cinema. Based on Rumer Godden’s novel An Episode of Sparrow, the film tells the tale of a young girl called Lovejoy Mason by following her quest to build a small garden in the rubble of post-Blitz London. Inspired by the film’s strong sense of locality, the following day we will be doing a critical excursion based around the sites from the film which will trace the journey of its cocksure heroine, Lovejoy, through the streets of Battersea and Pimlico. The tour will be open to the public and will end with reflective discussion on the screening and the excursion.

This critical excursion will provide a critical space for the event participants to walk together, converse and discuss the questions raised during the screening.

The ‘The Child in the City’ Critical Excursion schedule is as follows:

Further details about the event will be sent directly to the registered participants by the SPT team. Any queries should be directed to: space.place.time@gmail.com

The event is organised by The Space, Place and Time Research Group. SPT is a collective of doctoral researchers funded by the Consortium of the Humanities and the Arts – South East (CHASE) whose projects explore the concepts of space, place and time. The group aims to foster conversation and collaboration between various disciplines that share this research focus. Our members include both practice and theory based researchers working across the wide range of fields, including literature, sound studies, visual cultures, theatre and performance, media and communications, philosophy and history.

The event is kindly supported by the CHASE Doctoral Training Partnership (https://www.chase.ac.uk). CHASE doctoral students are strongly encouraged to sign up and join the event.