You’ve probably heard a lot about voice recognition in the news – maybe because someone has accidentally ordered 600 tins of spaghetti hoops through their Amazon Echo. Although it’s possible to entrust many aspects of your life to Alexa, there might be some unexpected consequences. In this week’s Thing, we’ll look specifically at how voice recognition can make your writing process a little easier. Wouldn’t it be nice if we could just talk about our research, then it pops up on the screen? Let’s find out how that can be done with three different tools.

Who wouldn’t want a friendly dragon that takes dictation? Dragon is probably the most popular speech recognition software, and it’s arguably the best. It works with applications such as MS Word by transcribing your spoken word into text. While there are many other tools that perform the same job, Dragon is currently the most accurate. It learns the words and phrases you use the most to minimise corrections, and is also very clever at dealing with accents. You need to spend some time familiarising Dragon with your voice and vocabulary, but it’s worth the effort. 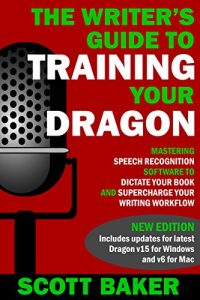 Confusingly, there are lots of different versions that all work in slightly different ways. If you’re serious about investing in a Dragon, start with Scott Baker’s book, The Writer’s Guide to Training Your Dragon. With his guidance, users can achieve up to 5,000 words an hour and 99% accuracy. Imagine how productive you could be!

The software costs from £79.99-£279.99, depending on the features you need (Scott’s book can help you decide). It’s definitely not a cheap option, but it could transform the way you write. There are generous educational discounts available, too.

2. Type with your voice in Google Docs

If you don’t fancy the responsibility or cost of your own dragon, you could try typing with your voice in Google Docs. The accuracy is lower than Dragon, but it’s completely free. Simply plug in your microphone, select your regional accent (e.g. Canadian English), and start speaking.

You’ll need to get used to talking at a consistent pace and loudly enough for the microphone to catch everything. You’re bound to feel self-conscious at first, so do close the door. Once you’ve grasped the basics, start adding punctuation with your voice:

Of course, it’ll be necessary to do some tidying up afterwards, but this feature could save you a lot of time spent hunched over your desk.

You might have noticed that Google is behind most of the technology mentioned in this post. That’s because they invest a huge amount of money in Artificial Intelligence (AI). Consequently, some of the best voice recognition apps are currently available only on Android devices. The Android Voice to Text feature will work with most of your mobile apps, including MS Word, so it’s very easy to dictate when you’re on the move. It’s also integrated with the note-taking tool Evernote, which we’ll investigate next week.

As you probably know, you can use the voice command “OK Google” for speech-directed searches and other activities such as setting reminders. Your phone is always listening (not a comforting thought) and ready to do your bidding. If this makes you want to retire to a bunker in a tin hat, follow these instructions to deactivate it. Undoubtedly Google is still listening, but you’re less likely to receive an unexpected delivery of spaghetti hoops.

Could you write your thesis just by talking to yourself? Probably not. But taking advantage of voice recognition technology could boost your productivity and reduce wear and tear on your back. And, with the rapid rise of AI, getting used to voice commands could help prepare you for the future.

The suggested activities for this week are:

As ever, please let us know how you get on by tweeting @CHASE_DTP with the #23Things tag (extra points available if you manage it without typing).